skip to main | skip to sidebar

EDL Run Out of Town 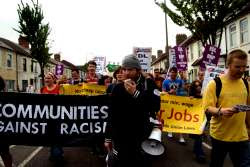 The English Defence League “Double Demo” turned out to be a double failure today. Their boasts about having enough support in Wales to hold two demonstrations, in both Cardiff and Swansea, dissolved into two small protests of just a handful in Swansea and around 200 in Cardiff – only a tenth of what they were threatening to bring.

The antiracist campaign outnumbered the EDL by at least five to one, with around 1000 on the demonstration from Cardiff Bay and more waiting outside City Hall, a short distance away from the EDL protest, where “Welsh” Defence League supporters waved St George’s flags and chanted E-E-EDL.

Police led the march into a street blocked by a high steel fence and initially prevented anyone from leaving. But, despite mobilising across 7 forces, police had to abandon the “soft kettle” to redirect resources when Cardiff City fans clashed with EDL supporters as they emerged from coaches.

The antiracist movement had gathered enough forces on the day to have been able to cut off the city centre from the EDL but unfortunately this force was not organised as effectively as it could have been and the day was marred by reports of groups of EDL chanting in the centre of town unchallenged. Those protesters who were determined to oppose the EDL were left without a means of effectively coordinating their activity when the UAF stewarding team, from which other antiracist organisations were excluded, was stood down before the EDL protest got under way.

Nevertheless, it was obvious the EDL were sweating as they were marched to their coaches, pursued by hundreds of local people, Cardiff City fans and Asian youth. Shoppers shouted opposition to them as they went past, some followed them to the station as they were escorted by hundreds of police through the city. £250,000 was spent by the police on guaranteeing the racists’ right to hurl abuse, while local Cardiff residents were cleared off the streets.

Cardiff Communities Against Racism was set up as an ad-hoc attempt to co-ordinate the different antiracist organisations planning to oppose the EDL protest. It organised open and democratic meetings every week, bringing around 170 different people into discussions about how to develop an effective strategy for defeating racism and the far right. Activists are aware that although the EDL were defeated in Wales again today, scapegoating for the social problems cause by capitalism will continue while public services and jobs are being attacked by big business and the politicians who represent them. Supporters of CCAR are planning to discuss how best to develop their campaign in the period ahead, when the BNP are threatening to stand in the Assembly elections.

Unfortunately, CCAR had to waste time on the eve of the protest defending itself against smear attacks from another antiracist organisation. An email circulated by the local leaders of Unite Against Fascism who split the protest against the EDL in Newport last year (see The Socialist issue 601) made an untrue accusation against CCAR of attempting to split this year’s Cardiff demonstration. CCAR responded by demanding that UAF send out an apology and a correction to prevent potentially dangerous confusion amongst activists on the day but this was ignored.